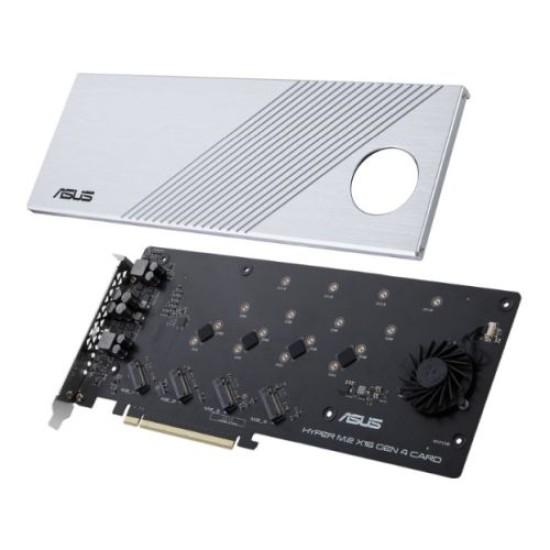 The ASUS Hyper M.2 x16 Gen 4 Card is compatible with the Intel® X299, Z390, Z370 and future platforms' RAID-on-CPU function, and supports PCIe 4.0 NVMe RAID on the AMD TRX40 and X570 platforms. Unused CPU PCle lanes can be assigned to storage, allowing you to create a bootable RAID array with up to four M.2 SSDs*.
*M.2 SSD support dependent on CPU and motherboard design. Please check the specifications and user manual of your motherboard. Update to the latest BIOS and set up PCIe bifurcation settings before using the NVMe RAID function.


One card, 8X the bandwidth

The ASUS Hyper M.2 x16 Gen 4 Card has four M.2 slots — supporting both PCIe 3.0 and 4.0 — that allow you to expand your system with high-performance SSD storage. Designed for the latest generation of NVMe drives, the card features an upgraded power supply that provides up to 14W of power per drive, as well as a large heatsink and active fan to ensure that drives stay cool for optimum performance.